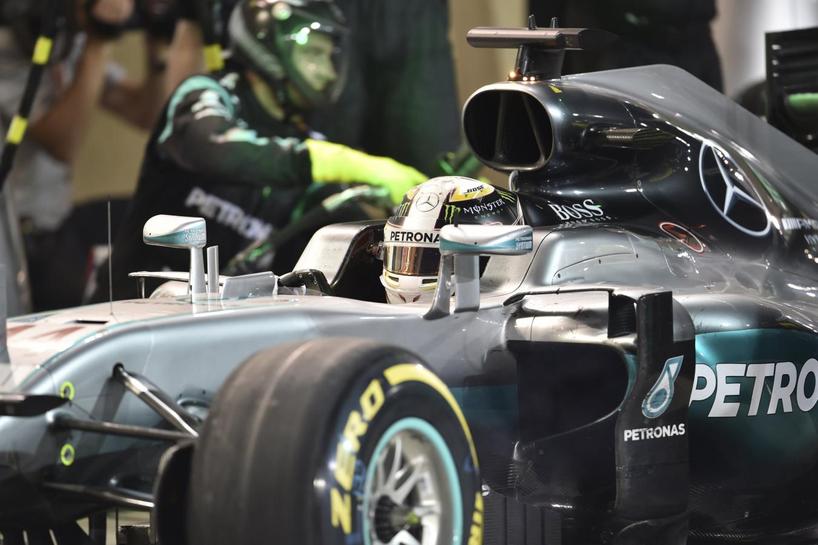 Mercedes F1 driver Lewis Hamilton of Britain sits in his car in the pits.

SHANGHAI Triple world champion Lewis Hamilton looked for positives at the Chinese Formula One Grand Prix on Thursday after a five-place grid penalty wrecked his hopes of a third successive pole position this season.

The Briton, who has won at the Shanghai circuit for the past two years, collected the penalty after Mercedes decided to change his car’s gearbox ahead of Sunday’s third round of the season.

“For me a challenge is an opportunity to rise,” said Hamilton, who has the words ‘Still I rise’ emblazoned on his helmet and tattooed across his back.

“I love racing so I get to race this weekend rather than be at the front and have less of a race,” he told reporters.

Hamilton qualified on pole in Australia and Bahrain but suffered poor starts in both races, which were won by German team mate Nico Rosberg who now has a 17 point lead in the standings.

The reigning world champion has not won a race since he clinched his third title last October in Texas, with Rosberg now chasing his sixth successive victory, and had to fight back from seventh at the end of lap one to third in Bahrain.

Hamilton recognised it would be a tough weekend but said fighting through the field reminded him of his karting days, when others had better equipment and he had to make the difference.

“Actually, the last couple of races, being a little further back has been really exciting,” he added.

Mercedes have won 34 of the last 40 races and, with Hamilton starting no higher than sixth, Rosberg will be favourite to add to the tally and stretch his overall lead.

The German will needed no reminding of 2014, however, when he was 29 points clear of Hamilton at one stage but still lost out to his team mate in the end.

“It hasn’t really changed my approach at all,” Rosberg said of the Briton’s setback. “A Hamilton that starts sixth is still going to challenge for the win and we know that.”

Mercedes said Shanghai, a circuit where Hamilton has won four times and more times than any other driver, was the best place to take the penalty after the gearbox was damaged in Bahrain.

A driver must use a single gearbox for six consecutive events or take a mandatory penalty.

Hadleigh Parkes column: The job is only half done.

Next Wales coach says it is important to maintain four competitive regions.

He really is the cutest little man. Swoooon!

I didn't expect this poster to arrive folded. Now there are lines on the poster and one sad Ninja.

British And Irish Lions Legend Jeremy Guscott On Their

Jorge Sampaoli’s Chile Side Will Entertain Fans If They Qualify